As Coachella 2017 nears, here are the lineup changes (hello Lady Gaga!), new ticket prices, and tips for the Coachella virgins.

Coachella 2017 is starting out to be quite a controversial festival since original headliner Beyonce has since been replaced by Lady Gaga. Due to Beyonce's pregnancy, NME reports that Lady Gaga will headline Saturday instead and Beyonce will be moved to Coachella 2018.

Lady Gaga is a musical goddess in her own right, just as much as Beyonce is, but the last-minute switch has made significant changes in the ticket prices.

Coachella ticket sales are crazy and usually, tickets are sold out on the first day the sales go live. This is why a lot of Coachella attendees scour secondary markets for tickets, that go as high as twice or thrice its original price.

If you haven't checked out the full Coachella 2017 lineup, here are the bands and individuals that will color the Coachella 2017 stage on April 14-16, and then again on April 21-23. 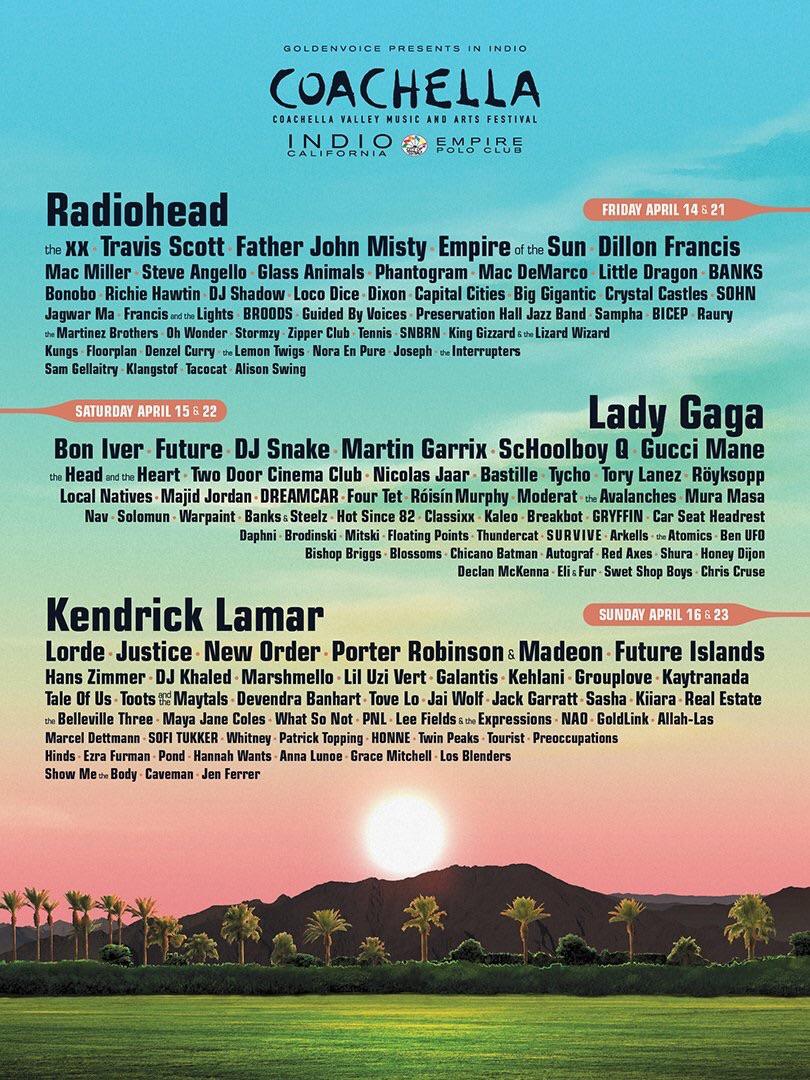 If you're a fan of trap/dance/hip-hop, you should definitely look out for 20-year-old Alexander Crossan, also known as Mura Masa, and Paris native Louis Brodinski. Both Mura Masa and Brodinski will be performing on Lady Gaga day.

For a more unique experience that matches indie with electronic, be sure to catch Glass Animals on a Friday.

A powerhouse DJ from down under should also be on your radar at Coachella 2017. Catch What So Not on Sunday for your dose of trap at Coachella weekend.

If Coachella 2017 happens to be your first Coachella, fear not, as we've got a run down of what to do and prepare for, for the best Coachella experience.

Coachella is one hot experience, in all the meanings of hot you can think of. This is why when attending Coachella, remember to always keep a bottle of water on your person at all times, and lather up on sun block throughout the day. It is also wise to keep the beer when the sun has come down since high alcohol content and a 100-degree weather won't make you feel too good to party.

Be ready for the crowd. Coachella tends to be very crowded and it's easy to lose your group. For Coachella campers, make sure to bring a flashlight since it's easy get lost in a nighttime crowd. If you're staying outside the venue in a hotel, make sure to head for the festival earlier every morning since traffic can get very congested around the Polo Fields.

It also follows that since the Coachella site is cramped, cell phone reception could be quite a problem. Text messages tend to get sent or received late so it's wise to text affirmative statements such as "Meet at the campsite at 8:00" instead of "Where are you?" You may also want to bring a battery pack with you if you're planning to take a lot of selfies throughout the event since there are no charging stations in the festival grounds.

One of the more important things to bring at Coachella are, believe it or not, earplugs. The music is loud—capital L-O-U-D, especially if you're on the front row. Wear ear protection so as not to damage your hearing permanently.

Buy merchandise on the first day, not when everyone else is buying it on the last day. Lines are longer as the festival progresses and you'll always run into the danger that your size runs out.

Even though Queen Beyonce won't make it to Coachella 2017, this year's festival is surely going to be another big hit. Print out the setlist and plan your artists so as to maximize your Coachella 2017 experience. And most of all, have fun!